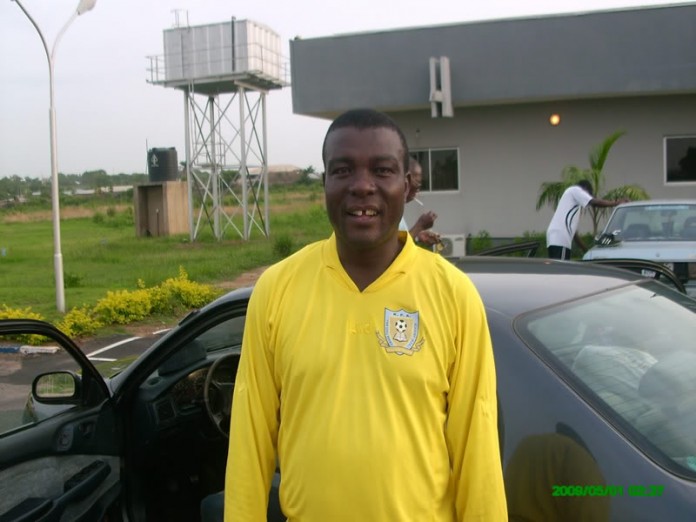 Thompson Oliha, a former Super Eagles midfielder and a member of the 1994 African Nations Cup winning squad in Tunisia, is died, aged 45.

Oliha died in the early morning of Sunday at Yusjib Industrial Medicare in Ilorin, shortly after he reportedly slumped in his toilet.

He was later rushed to the Medicare, where the Chief Medical Director of the hospital, Dr Abdulraheem Yusuf confirmed his death to newsmen.

Before his death, Oliha was reported to have been vomiting after he led Kwara Football Academy to beat a Malian team, Ben Mackezie Football Foundation on Saturday in Ilorin.

Until his death, the ex-Nigeria International was the coach of the senior students of the academy.

In his reaction, Coach Paul Odey of the junior students of the academy described Oliha’s death as a tragic and sudden.

Odey said that his remains have been deposited at the University of Ilorin Teaching Hospital Mortuary.

The coach added that his family members have been contacted for burial arrangement, but could however not confirm the next line of action as at the time of filing in this report.

Born in Oct. 1, 1968 in Benin City, Edo, Oliha played for several clubs in Africa and Europe.

He retired at the age of 27, as a result of a knee injury.

Before his retirement, Oliha made a total of 31 appearances for the Super Eagles, scoring two goals.

He made his international debut in 1990, in a friendly against Senegal and made his last appearance at the 1994 FIFA World Cup, as a late substitute against Italy.

Oliha, alongside members of the Eagles squad that won the 1994 Nations Cup are yet to get the house promised them by the federal government for winning the tournament.

Oliha would be the third member of the 1994 African Cup of Nations winning team to pass away.

The first two were Uche Okafor, who died in the United States of America and Rashidi Yekini, who died more than year ago in Ibadan.

Oliha, had earlier in an interview with NAN on March 9, appealed to the Federal Government to fulfil its promise to the team after it won the 1994 Africa Cup of Nations (AFCON) in Tunisia.

“I beg the Federal Government to fulfill its promise of giving every player in the team a house for our victory in the 1994 AFCON.

“I have yet to receive my own house which the government promised me 19 years ago; my great country has disgraced me and some members of the victorious team,’’ Oliha had pleaded.

He urged those in charge of allocating the promised houses to members of the team to release them.

“The people in charge of the allocation should please come out of their shells and give us our rightful possessions,” he said.

According to Oliha, players that chose Lagos for their own houses were allocated houses while he and the rest who picked Abuja have yet to get their allocation.

Ten Hag era at United begins with defeat to Brighton