The United States (U.S.) Consulate in Lagos says it is committed to training over 1000 youths and 170 radio journalists to promote media literacy in the country.

Stephen Ibelli, Public Affairs Officer, U.S. Consulate, made this known on Monday at the opening ceremony of a workshop organised by the mission, the West Africa Broadcast Media Academy(WABMA) and Enugu Literacy Society (ELS).

The two-day workshop, themed “Media Literacy and Countering Misinformation”, seeks to build the capacity of radio producers, reporters and presenters in media fact-checking. 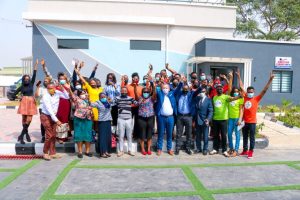 According to Ibelli, a healthy democracy requires both an informed public and an accountable media that provides truthful and objective information.

He said that by promoting media literacy, the principles of transparency, good governance and rule of law that served as the essential cornerstones of a democratic society were strengthened.

“The U.S. mission has funded training programme for many Nigerian journalists on topics ranging from media fact checking, investigative journalism, among others.

“We continue to do this not only because it is important to promote media literacy, but also because journalists are the gatekeepers to accurate and factual information.

“In the months to come, we ask that you promote media literacy skills and educate your audience and the people in your different social networks and communities to be vigilant against the threat of false information,” Ibelli said.

Jika Attoh, Executive Director, WABMA, said journalists had the responsibility to give their audience accurate information.

He said that it was important to find out the source of information being shared, adding that there were several dimensions to misinformation.

“Do not ever share information you are not sure of because people learn and pick up so much from us as journalists.”

Attoh urged journalists to act professionally, adding that they had the ethical and religious obligation not to share false news.

“The embarrassment of having to withdraw a false report or to apologise for spreading false report cannot be overstated.

“Young persons especially need to be trained regularly because they’re the ones who mostly spread fake news on social media,” he said.

Also, Ken Okere, Founder, ELS and Coordinator of the workshop, said that radio remained the number one most accessible platform to people across Nigeria.

According to him, over 70 per cent of Nigerians are highly dependent on information disseminated on radio for an obvious reason of “lack of electricity”.

“We’re hoping that through our partnership with radio stations, they will be vanguards of the campaign against fake news.

“The media landscape in Nigeria has exploded in the last 20 years and we need sufficient training for the burgeoning industry.

Okere said that fear was a dominant factor in misinformation.

“If people cannot read, they cannot comprehend well and are more liable to be superstitious and fearful.

“Superstition and fear coupled with ignorance is what drives fakes news acceptance and consumption,” he said.