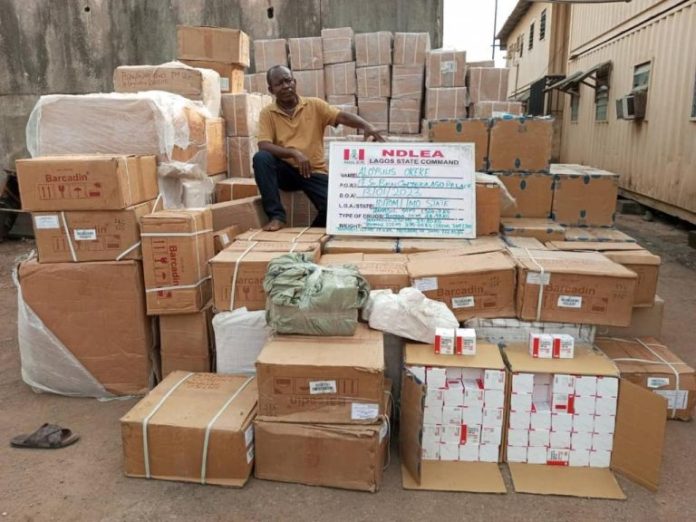 Anti-narcotics officers of the National Drug Law Enforcement Agency (NDLEA) have uncovered and dismantled a clandestine skuchies laboratory in a remote part of Sagamu in Ogun.

This is contained in a statement by the Director, Media and Advocacy NDLEA, Mr Femi Babafemi on Sunday in Abuja.

He said that the operatives discovered the laboratory where skuchies, a highly potent psychoactive substance were made with a blend of Cannabis Sativa.

This, he said, included tramadol, Rohypnol, Exol-5 and industrial codeine produced in large quantity, packaged and distributed in jerry cans and bottles.

“All the equipment for the production including power generators, industrial gas cylinders, drums and kegs have also been recovered.

“Various quantities of illicit drugs such as 214kgs cannabis; 1,440 capsules of tramadol; 480 tablets of swinol were seized.

“Also, 1,440 tablets of Rohypnol and 114 liters of industrial codeine, among others were also recovered from the building before sealing off the premises,” he said.

Babafemi quoted the Chairman, NDLEA, retired Brig. Gen. Buba Marwa as commending the officers and men of Ogun Command for the arrests and seizures.

Marwa charged them and compatriots across the country to sustain the heat on drug cartels in Nigeria while balancing their efforts on supply reduction with drug demand reduction activities.