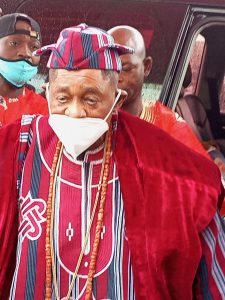 The Alaafin of Oyo, Oba Lamidi Olayiwola Adeyemi III, has urged the Yoruba race to preserve and sustain the culture and tradition of people in their respective towns and communities.
Oba Adeyemi made the plea on Saturday, while addressing visitors, tourists and worshippers of Sango at the Grand Finale of the 2021 World Sango Festival in Oyo Town.

The first class monarch said that preservation of culture and tradition of people became necessary for the sake of the coming generations.
According to him, it is the duty of the current custodians of culture and tradition to work toward the promotion of Yoruba cultural heritage in their respective towns and communities.
On significance of the Sango Festival, Alaafin said Sango, during his reign as Alaafin, was powerful and had exceptional attributes that made him different from those that ruled before and after him.
He revealed that though, Sango reigned for seven years, he was the best king that ever ruled Oyo Kingdom before he later became a deity.
The Alaafin said that Sango Festival, which had became one of the recognised festivals globally, promotes Yoruba culture and heritage.
He, therefore, prayed for sons and daughters of his kingdom, admonishing them to continue to live peacefully.


Meanwhile, a Brazilian Tourist, Krusche Wisky, who also named himself as “Fabiawo Eniesu”, lauded the rich cultural festivals of Nigerian people, especially Yoruba people.
Krusche Wisky said on the sidelines, that he along with other tourists, have great passion for rich cultural festivals of Yoruba people.
Eniesu, who said he felt proud to be associated with the Yoruba, explained that his family in Brazil has an African ancestral lineage.
The tourist revealed that he was an Esu deity worshipper, saying “Esu is not a Satan as many people perceived, rather Esu deity is a god like other gods being worshipped across the world”.
He commended the organisers of Sango Festival, saying the festival showed-case the rich culture and tradition of Yoruba people.