Joe Biden was sworn in on Wednesday as the 46th president of the United States (U.S.), in a ceremony administered by Chief Justice John Roberts.

Moments earlier, Kamala Harris was sworn in as vice president of the United States, becoming the first woman of colour to hold the office.

The ceremony, on the West Front of the Capitol, took place without former President Donald Trump, who is in Florida.
Trump’s deputy, Mike Pence, was in attendance.
Biden immediately delivered his first speech as president.

Meanwhile, British Prime Minister Boris Johnson has congratulated Biden and Vice President Kamala Harris on being sworn in to their new roles.

“Congratulations to @JoeBiden on being sworn in as President of the United States and to @KamalaHarris on her historic inauguration,” he tweeted.

“America’s leadership is vital on the issues that matter to us all, from climate change to COVID, and I look forward to working with President Biden.” 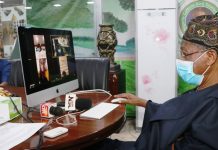 March 2, 2021
We use cookies to ensure that we give you the best experience on our website. If you continue to use this site we will assume that you are happy with it.Ok