The Presidency has criticised the concocted controversy over President Muhammadu Buhari’s position on proposed N30,000 by some political actors to score cheap political goals, saying “stiff judgment awaits them at the polls’’.
Mr Femi Adesina made the condemnation in a statement in Abuja on Thursday while reacting to comments apparently made by the Atiku Media Office.
In a statement by his media office, Atiku had allegedly claimed that “President Buhari cannot be trusted to implement the ‘new’ minimum wage of N30, 000’’ recommended by the Ama Pepple tripartite committee.
Atiku, who is the presidential candidate of the Peoples Democratic Party (PDP), said “Buhari may not have the political will to implement the new wage’’.
However, Adesina said: “Those who have latched onto the concocted controversy to play cheap politics, we appeal to them to remember that elections are not won through loquaciousness, and trying to demean the President at every drop of a hat.
“But then, it is not surprising, as they have nothing else to sell to Nigerians, if they don’t ride on the name of the President. Stiff judgment awaits them at the polls.’’
The presidential aide, therefore, frowned at the recurring reports alleging that Buhari had reneged on earlier acceptance of the N30,000 recommended as the new National Minimum Wage by the National Minimum Wage Tripartite Committee.
He noted that these reports were contrary to what transpired on Tuesday when the committee presented its Report to the President.
He said the president, while acknowledging the concerns raised by government on affordability and labour’s focus on meaningful increase, stated clearly in a speech, which was made available to the media that:
“In a way, both arguments are valid. I want to assure you all that we will immediately put in place the necessary machinery that will close out these open areas.
“Our plan is to transmit an Executive Bill to the National Assembly for passage within the shortest possible time. I am fully committed to having a new National Minimum Wage Act in the very near future.
“As the Executive Arm commences its review of your submission, we will continue to engage you all in closing any open areas presented in this report. I, therefore, would like to ask for your patience and understanding in the coming weeks.”
Adesina observed that: “From the above, and throughout the report-submission ceremony, the President never mentioned any figure. What he committed himself to was a new minimum wage, and only after the Report of the committee has been reviewed by the executive and legislative processes of government and an appropriate bill presented to him for assent.
“Until the proposed minimum wage has gone through the whole gamut of law-making, President Buhari, who is a stickler for due process, will not be caught in this unnecessary web of controversy, which amounts to putting the cart before the horse and hair-splitting.’’ 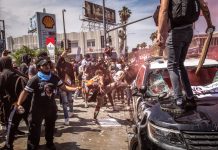